When the material photographic medium asserts itself - Kertesz's Broken Plate

It has sometimes been argued that the photographic medium is 'transparent', though different writers mean different things by this claim. Famously - or infamously - Kendall Walton argued that photographs are transparent in the sense that we literally see, or are in a kind of direct perceptual contact with, the real objects they depict. In his essay Transparent Pictures Walton writes that:

"With the assistance of the camera . . . we can also see into the past. We see long deceased ancestors when we look at dusty snapshots of them . . . Photographs are transparent. We see the world through them . . . I must warn again watering down this suggestion, against taking it to be a colourful, exaggerated, or not quite literal way of making a relatively mundane point. I am not saying that the person looking at the dusty photographs has the impression of seeing his ancestors . . . Nor is my point that what we see - photographs - are duplicates, or doubles or reproductions of objects, or substitutes or surrogates for them. My claim is that we see, quite literally, our dead relatives themselves when we look at photographs of them."

Perhaps unsurprisingly Walton's position has not garnered many followers, though it is a credit to the ingenuity of his argument that so many critics have sought to reveal where it goes wrong. My interest today, however, is not in Walton's argument or indeed those of his critics. Rather it is the the thought that the photographic may be transparent in a different though related sense - one that we can find Roland Barthes articulating - that is my starting point. The thought is this: when we look at photographs our attention very rarely strays from the subject matter of the image to contemplate the medium that gives us that image. As Barthes makes the point in Section 2 of Camera Lucida, 'Whatever it grants to vision, and whatever its manner, a photograph is always invisible: it is not it that we see.' Lets immediately dispense with Barthes' rather hyperbolic claim that this is 'always' the case and replace with the more modest 'usually'. So qualified, there is something right about what he says. Photographs typically function as relatively pristine windows: when we look at them our attention goes directly through them to their subject matters. Its quite a rare for the medium to assert itself and grab our attention. 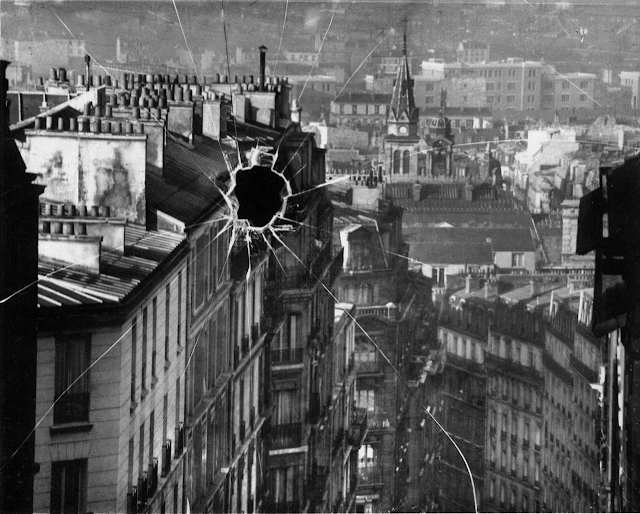 I think it is quite natural and quite common for viewers who first encounter this image to suppose that what they are seeing is a photograph of Paris taken inside a building through a broken window with  a hole in it and various lines of fracture. I have shown it to numerous people who draw this conclusion right away. But we know this isn't the case, not least because Kertesz wrote of this image that:

"In this picture of Montmartre, I was just testing a new lens for a special effect. When I went to America, I left most of my material in Pais, and when I returned I found six percent of the glass-plate negatives were broken. This one I saved, but it had a hole in it. I printed it anyway. And accident helped me to produce a beautiful effect." (Kertesz on Kertesz)

Whether you discover this fact about the photograph by reading what Kertesz has to say about to, or by looking somewhat more carefully at picture and seeing that there is something not quite right about the broken window explanation of what we see, the effect upon upon our experience of the image is interesting. Indeed, I can easily get this experience when I look at the image despite knowing precisely what it is I am looking at. The only way I can think to characterise the experience  is to say that somehow our attention draws back from the scene - from the Montmartre buildings - to the image's surface. When this happens it seems much harder to attend to the Paris buildings; its as if they become ever so slightly vaguer as one's focus shifts to the surface foreground of the image.

The experience is quite similar to that had when looking through a window that has something on it, such as a crack, a stain or anything else that can be focused upon. When we focus upon the what's on the window our perceptual awareness of the scene outside that can be seen through the window is diminished. We don't cease to have any awareness of what is outside the window, but its vaguer and less focused.

That a similar experience can be had with photographs when the material medium draws our attention to the image surface can appear rather odd. After all, there are huge differences - not least a significant spatial difference - between a window and the world that can be seen through it. With photographs there are no counterparts to some - probably most - of these differences. The building of Montmartre and the cracks and hole in Kertesz's image reside together on the same surface. That we can experience the image is certain respects similar to the experience of looking through a window with cracks and a hole in it indicates something about perceptual psychology, but also that the window-like quality of many photographs is a visual metaphor so easily enabled by the photographic medium and its use. Its when the medium asserts itself and draws our attention to the photograph rather than what it is of that this visual metaphor comes to our attention. It doesn't happen that often, but when it does it can have have such a pleasing and interesting effect. Kertesz called this effect 'beautiful', and I find that a pleasing description of it.

Posted by Emerson Sprocket at 08:19

Email ThisBlogThis!Share to TwitterShare to FacebookShare to Pinterest
Labels: The Medium of Photography