A 'Saucy' Photograph - "The End is In Sight"

Here is a photograph that I encountered on a major news website, illustrating an article that sceptically reviewed a recently published academic study arguing that going nude in public makes those who do it happier. The author's point, which was couched in intentional humour, was that shame about the nude body is just as natural as whatever happiness may be aroused by such behaviour among committed naturists. To be frank I probably wouldn't have read the article if it hadn't been illustrated with this wonderful photograph, which is entirely within the humorous spirit of the article: 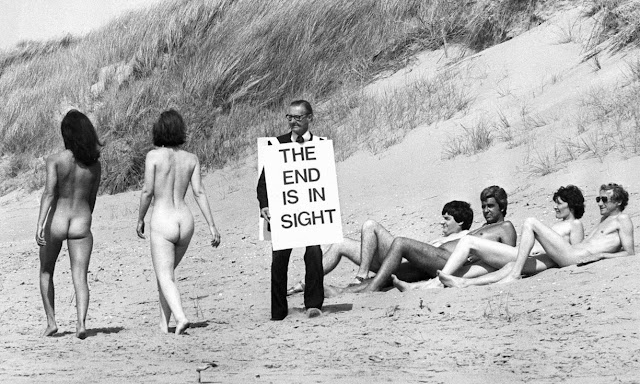 The photograph is titled Nudism on Hinsdale Beach, Southport, July, 1979, but is not credited to a particular photographer, but rather to the stock photo agency linked to the Trinity Mirror newspaper group. They publish The Mirror newspaper, a centre-left British tabloid, that like all British tabloid newspapers is - or at least was - steeped in the culture of the 'saucy'.

I have never encountered an equivalent of the 'saucy' in another country, and perhaps it is distinctively British. Formally I suppose one could say that to be saucy is to be sexually suggestive in a lighthearted and humorous way, but it connotes so much more that is intimately bound up in a now largely extinct British veneer of Waspish prudishness. The mark of the saucy is innuendo and the double entendre - with my image above amusingly employing the latter - and it was once the staple of   the 'red top' tabloids, as well as certain types of British stage and screen humour.

But its hard to imagine this photography being made now, or if it was, being upstaged. Partly this is because the kind of religious protester and cultural critic at the centre of the image is very rare these days - at least in Britain. But also because our imagery is typically far more sexually explicit, lacking any respect for saucy humour. While sauciness was still common in popular British popular culture in the 1970s, by the 1980s it was a waning form. In the light of the long sexual revolution, it was at first able to assert itself as an instance of a more sexually aware and tolerant age - think of a television sitcom such as 'Are You Being Served?" -  before being rejected for its ultimately prudish presuppositions. We are also more aware that saucy humour often relied upon cruel attitudes and stereotypes, and we are less comfortable with and tolerant of such humour.

So I'm not mourning the loss of the 'saucy' since most of its manifestations in Britain were awful, but this 'End is in Sight' image demonstrates that it wasn't all awful when its targets are not so much demeaned as teased. That is what this photograph does, and what saucy at its best can do, it teases rather than makes fun of its subjects.

Posted by Emerson Sprocket at 09:17