In 1956 Frank Horvat was a 28 year old Croation photographer who at had just moved from London to Paris to further advance his already blossoming career. His work had already featured in a number of leading photo-magazines, including Life, Paris Match, Die Woche and Picture Post, and one of his photographs was selected to appear in the famous Family of Man exhibition curated by Edward Steichen in 1955 at the MoMA in New York. Horvat hoped the move to Paris would see more high profile commissions, and it wasn't long before a New York agency hired him to create a photo-spread about 'sexy Parisian nightlife'. This was a perfect opportunity to explore and exemplify his sense that there was a darker sider to Paris than that he saw in the humanistic photographers of the time, including the Paris of his hero and one time mentor Cartier-Bresson.

Horvat focused his efforts upon Place Pigelle, the then notorious district of Paris known for its sex shops, strip joints and prostitrutes - as well as being famed location of many great artist's studios. After finding the proprietors of these adult establishments reluctant to admit him with a camera he eventually bribed his way into a seedy strip club, Le Sphynx, named after a famous and elegant brothel that had been closed down some years earlier. Here is his photograph of the exterior of the club: 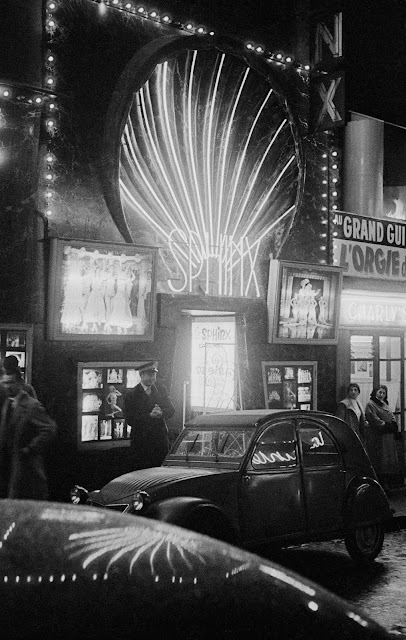 According to Horvat, he was asked to leave 15 minutes after being admitted because the girls complained that he was taking pictures of them without providing them with any further payment. But in that time he had shot five rolls of film and made some extraordinary images. 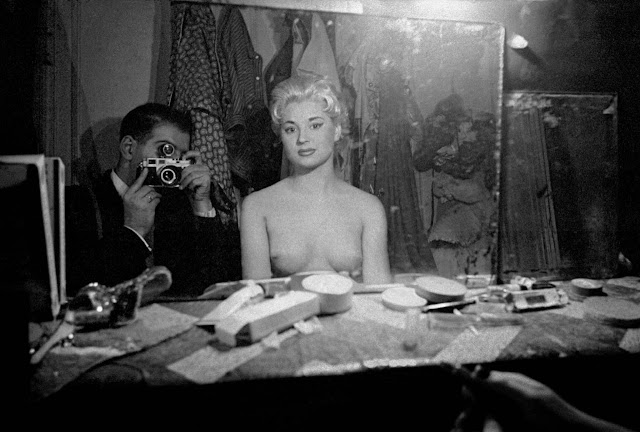 Sometimes titled 'Self-portrait with Stripper', we see Horvat with his Leica photographing a naked performer sitting at a disheveled table in front of the mirror in the dressing room. It being a strip club, the dressing room is a place that a costume is put on in order to be taken off on stage, and where make-up and her are arranged. In such clubs men remain dressed and Horvat is in a dark suit with his face obscured by the camera. The women by contrast is utterly bare and exposed to view. Part of the power of the photograph comes from the sheer beauty of the women, with her radiant white skin and pristine, sculptural quality at odds with her disordered surroundings. But for me its the expression on her face that gives this photograph a particular power. What I see there, or think I see there, is a kind of resignation, a kind of melancholy acceptance of the her fate as the locus of the male gaze, to which she returns a look of nothing more than patient toleration. I can imagine her thinking, 'get on with your pictures, take in what you must, I have things to do.' There is no happiness, no anger, no high emotion of any sort; just a kind of fatigue with it all, including everything that is bound up in playing the role of the sexual object.

This sort of sadness os magnified in another image of the what appears to be the same women. This image, with the appearance of having been taken with little or no awareness of its subject, catches the melancholy fatigue with the circumstances of such a life. 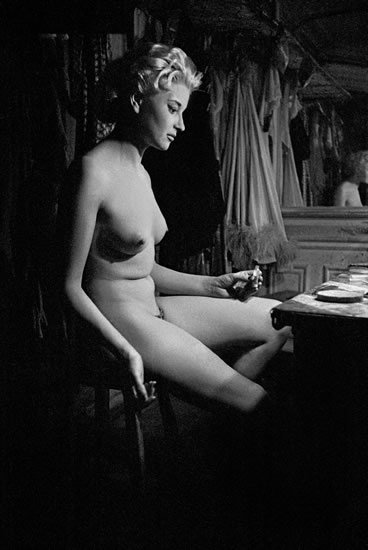 The slightly bowed head, the closed expression and its the contrast of the beautiful unclothed body, as well as the highlighting of the body by lighting it against a largely black background, all give this image a profound sadness. Models and others who's trade is their body and their ability to perform with it, are altogether different when they cease to perform. Here is the same women, now performing. 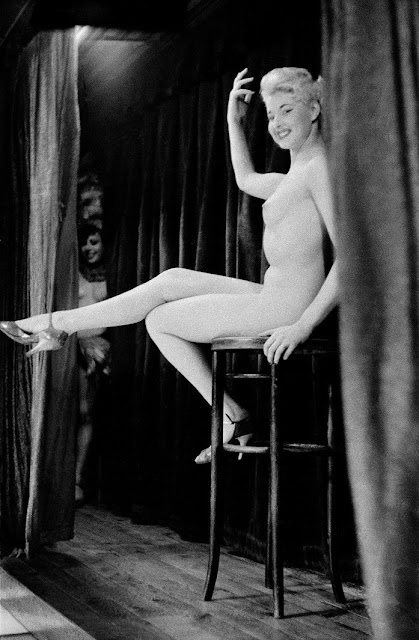 That smile seems so painful in light of what else we have seen about her. I don't know, but I like to imagine that the images of her taken backstage were made after this one of her performing.

Some of the other images capture aspects of that performance, and again place it in stark contrast to the alternative world backstage. 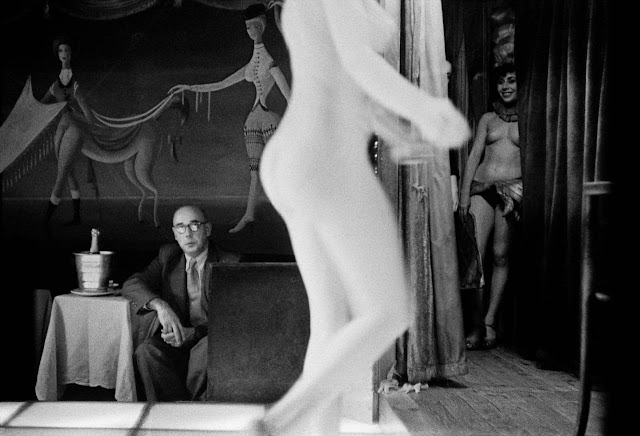 This magnificent photograph concentrates on the equal sadness of the clientele gazing upon a naked body, again almost sculptural in its purity, but without the distraction of a head communicating an inner life or providing a means of performance. The other women waiting in the wings, with the requisite smile fixed firmly upon her face, prepares for her performance. The spectator need make no such efforts. This cost is limited to the undoubted cost of entry and the purchase, no doubt, of a bottle of over-priced but poor quality champagne.

Another feature of this last picture I find oddly disturbing (aside from finding it nearly impossible to stop thinking the man gazing upon the model is the poet Philip Larkin) is the decorative painting above his head. What is depicted is a centauride who appear to be holding a shield, but is controlled by a lead rope by a stylised women. If you look carefully at the picture you will see a slight triangular darkening in the region of the genitals that is suggestive of pubic hair on both the centauride and the women who holds the lead. The message os one of women as exotic sexual playthings. but in a stylised and elegant world that stands in stark contrast to the sad middle-aged businessmen (epitomised by the 'Philip Larkin-like character) who constitute the clientele.

Another image shows a man on the stage, with his arm around one of the showgirls, who appears to be saying something to her and - at least to my mind - appearing to lead her away, as if she has embarrassed the house. 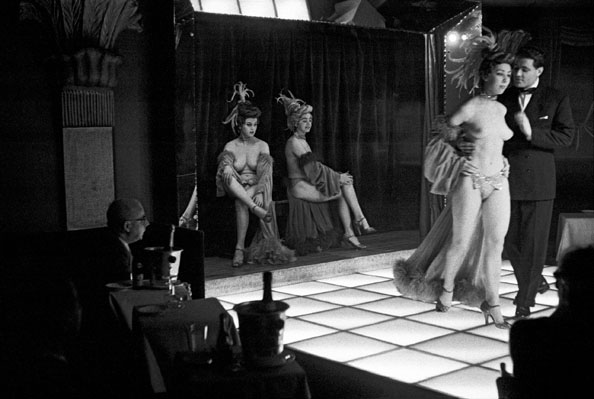 The look on the main showgirl's face is, again, sad; almost as if she is being gently told off, has done something wrong, or has just had enough. The other two showgirls sitting at the back of the stage appear to look on with some concern.

These images show a place that isn't sexy, or racey, or stylish, or fun. But it also doesn't look seedy or particularly exploitative. Rather, its just sad. Sad but beautiful women who make a living by taking off their clothes and pretending to be happy and sexy. Sad and lonely men who watch all this from the shadows.
Posted by Emerson Sprocket at 16:51 2 comments: