Sometimes there is just so much in a single image. On such photograph is Fred McDarrah's record of a party taking place in Andy Warhol's factory taken on the 1st of September 1965. Every time I look at it I seem to notice something new, or at least I find my attention grabbed by another feature. 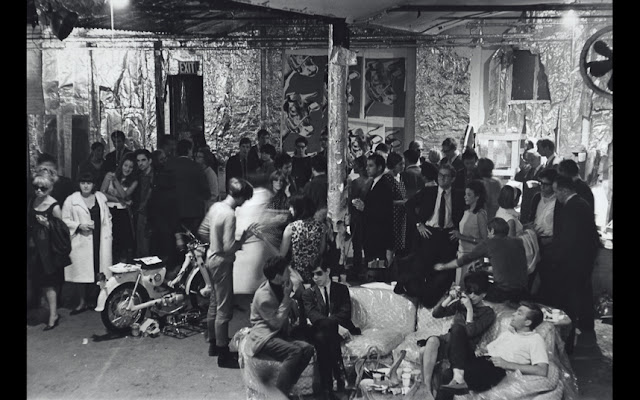 There is so much here it is hard to know where to start. There is something incongruous about the seemingly partly dismantled moped parked in the middle of the party, with a book or pamphlet resting open against the seat. This looks very much like the moped in the background of the photograph, taken at about the same time, of Warhol in the Factory spray-painting some paper. It is very beautiful and perhaps it just was a familiar object there to be appreciated. 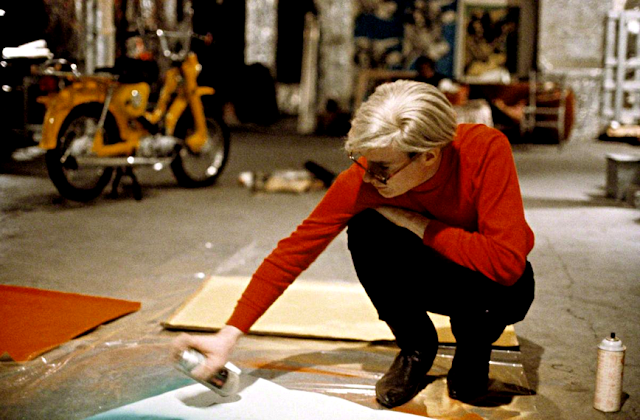 How about the two walls and pillar covered rather haphazardly with tinfoil. The reflective and textured quality has a certain appeal, and even though it appears little care has been taken in applying it, it certainly gives the room a kind of charmed character. For the time it must have seemed a very eccentric and 'arty' thing to do. And there on the wall, at the centre top of the image are a few versions of Warhol's screen print, which later was adapted into his famous cow wallpaper.

It might be worth recalling that, according to Warhol, the cow motive was created in response to the art dealer Ivan Karp's suggestion that Warhol produce an cow image because "they're so wonderfully pastoral and such a durable image in the history of the arts." Warhol goes on to report that when he showed Karp the huge brightly coloured cow heads he at first appeared shocked, but then said "They're super-pastoral! They're ridiculous! They're blazingly bright and vulgar!" Bright and vulgar is a good description of the entire effect of the walls; standing in stark contrast to the almost invariably cool attendees.

Two more things worth noticing can't even be directly seen. The first is the relative height at which the photograph is taken. McDarrah must be standing on something elevating him above the heads of the partygoers. This elevated perspective lets him take so much in as well as distancing the viewer from the event, placing us outside and above it.

Secondly, something interesting that we can't see is taking place behind the photographer, on his lefthand side. Why? Well, starting on the far left of the picture and going right, look at the faces of some of the guests. First there is the women with sunglasses, a black dress and a coat draped over her arm. She is looking with some interest at the invisible event. So too is the women in the white coat behind her, as well as the couple behind her. By the way, compare their facial expressions. The first women seems to have a look of slight anger or even a touch of disgust. The second looks bored by the event and the third women looks amused, while the man intimately beside her appears interested. Keep scanning to the right, and just after the moped look to the back of the room, near the tin-foil covered wall, and there is another less intimately connected couple gazing at the same occluded event. Continue scanning right, past the central pole, and you come to another couple looking at the event. The man has his hands on his hips and appears quite amused by what he sees, while the women beside him appears bored or perhaps gazes a bit disapproving at whatever is happening. Lastly, to the front left, the couple on the sofa are likewise engaging in whatever is happening outside the frame of the image. The women is interested enough to be photographing it even though she has on sunglasses, while her male companion to her left looks on with amusement and interest, raising this chin to ensure a good view is had despite his slouched position. Whatever it is it has grabbed lots of people's attention, while others carry on unaffected.

This subtle feature of the photograph works together with the elevated position of the camera to create much of the mystery of the photograph. The legendary place, and these people with access to it, are involved in something we can never be a part of. And they leave us wondering.

Whatever is happening I don't believe it involves the party's host. I might be wrong about this, but I think we can catch a glimpse of Warhol at the very back of the room. To find him, look to the far left of the cow print, and then carry on slightly further to the right there is a sharply-defined vertical line from an edge of  foil-covered wall. Follow this edge of wall down and you see the line hits the top of an apparently blond head upon which rest some sunglasses. Who knows of this is really Warhol, but it does look quite like him. While we are speculating about the identities of some of those depicted, take a moment to look at the man on the sofa in the sunglasses with his legs and arms crossed. He looks remarkably like Lou Reed circa 1965. Here is a photograph by Stephen Shore or Warhol and Reed together: 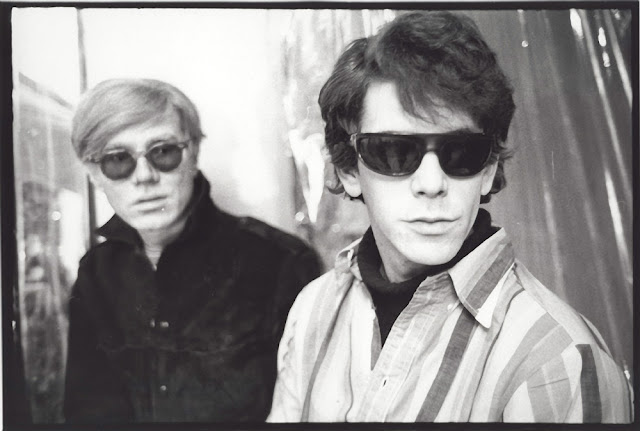 Maybe its Lou Reed in the McDarrah photograph, but maybe not. I like to think it is.

While we are thinking about our maybe Lou Reed character at the party, consider his posture and that of the man seated beside him and talking to him. The differing body language suggest there is an interesting story to be told about what is going on between them, and I keep wondering what it is.

One of the little details I like most about this photograph is also to be found at the sofa, but its not to do with the people sitting on it. Rather, it is the fact that it is covered in plastic. I haven't encountered plastic sofa coverings since I was a child in the 1970s, but even to my ill-formed child-like mind they indicated a kind of weird bourgeois ruining of a prized possession by attempting to protect it form ruin. That said, all of the plastic covered sofas I ever encountered were in respectable suburban homes, and this one is placed at the location of a party at which I imagine it may even be likely that something will happen that would scar the sofa. Cigarette burns, red wine stains, that kind of thing. Now of course, this is Warhol's Factory and perhaps the plastic cover is an ironic gesture - after all, he has tinfoil on the walls and a moped in the middle of the room.

Well, maybe. But what then do we make of this photograph of the factory from about 1965, maybe a bit before the party, in which the sofa appears without plastic, but with the glamorous Jane Holzer - a close friend of Warhol who acted in a number of his films (she subsequently became a very successful property tycoon, and owns a huge collection of Warhols's work): 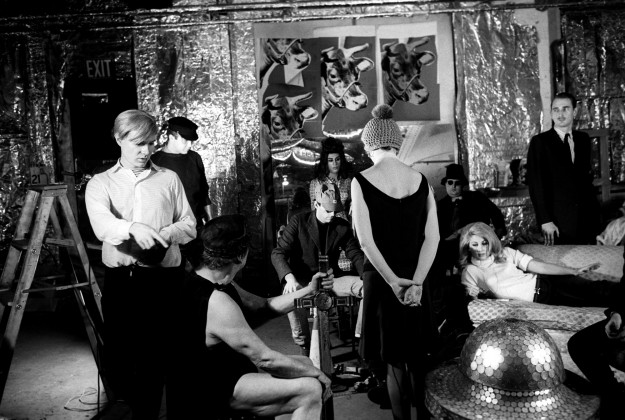 But also, there is another Stephen Shore photograph from around this time which shows Warhol reclining on the plastic covered sofa even though there is no one else around to cause it to come to any harm. 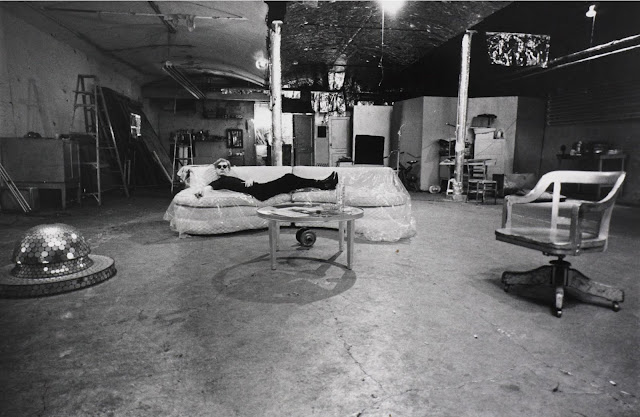 It might also be worth noting the tall ladder to the left in the background of this Shore photograph. That might have provided McDarrah's elevated position when taking the party photograph. It certainly looks about the right height.

Now once you start thinking about the cultural significance of plastic sofa covers, and then finding one in Warhol's factory, it makes one think a bit more about the people we see in the image. In the main, those attending the party seem to be dressed so respectably, with very few wearing what we expect of the beat generation and the New York avant-garde. The more I look at the people depicted the more I want to know who they are, how did they know Warhol, and why do they mostly look like they wouldn't be out of place at a cocktail party in Westchester County? At such an event one might expect plastic sofa covers  - rolling our eyes and smirking dismissively at their representation of the worst of bourgeois concerns - but  how do we reconcile their presence in Warhol's factory?

Now have a look at the man immediately to the right of the moped, who presumably left his dark suit and thing tie at home that evening. He seems so different, and he appears to be holding a giant claw-like hand. Look at the position of his arms, and you will see it is hard to imagine it actually is his hand. But what is that thing, and why is the women to his right in the print dress seeming to touch it? And who is the ghost in white in front of the two of them? What is going on in this image?

McDarrah photographed the people and events of Greenwich Village as a staff photographer for The Village Voice for many decades. He is particularly famous for his images of the Beat Generation and the New York art scene in the 1950s and 60s, though he continued to create significant photographs of New York life well into the 1990s. What he captures in this image of the party is something of the appeal and mystery of the factory. Who wouldn't have wanted to attend parties there, and even better to be a part of this fabled milieu, and yet as long as we look at images such as McDarrah's of the party we are left noticing small details that only make us wonder what that might have meant.

Posted by Emerson Sprocket at 13:02