Last November a collection of Bill Bernstein's extraordinary photographs of the disco scene in 1970s New York was published. I have to confess that prior to looking through this book I really wasn't very familiar with Bernstein's work, but there is an impressive eye at work behind these images. One of my favourites is this, simply titled "Studio 54, 1979": 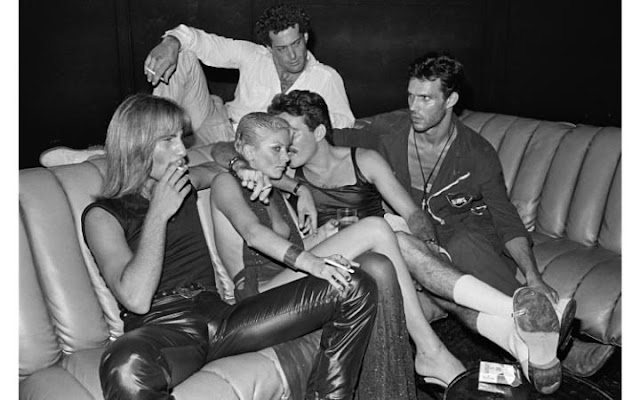 It might help those that are not familiar with this particular bit of our cultural history to note that Studio 54 was perhaps the most exclusive and fashionable of nightclubs, or discos as they were still referred to then, in the 1970s. Its fame extended well beyond New York where it was located.

Now with that bit of context behind us, consider the image. Five attractive young adults with the money and credibility to get admitted to the disco are arrayed in the manner of an unfolding sexual narrative. For me the story starts with the man in the white shirt at the centre-top of the image. His posture is one of confident, comfortable recline. A positioning of the body that calls attention to itself, while his expression seems to ask why he is not receiving that attention. His gaze is directed to the man on the far right of the image, and to my mind I sense in his expression and 'look' a combination of  curiosity, mild annoyance that the man on the right's attention is elsewhere, and a sexual energy.

The top man's gaze takes us to the man on the far right whose posture and expression is that of someone more agitated by what he is looking at. Notice that he has his right arm extended around the shoulder of the man to his right, the one with the white socks, a hint of a moustache and an interest in the ear of the only women in the image. Our man on the right seems annoyed by this moment of intimacy between white sock man and the women, but there is also a hint of anxiety and, well, intensity about him. Something like "What is he doing?", or "He better not be telling my secret" are the thoughts written on his face. Is this a moment in which jealousy has gotten the better of his cultivated cool?

The position of white sock man takes us to the women. It is clear that her primary interest is not in the man whispering in her ear (or, it being a nightclub, more likely shouting in her ear). Her gaze is outward to events and people behind the photographer and her expression is blank, perhaps uninterested - or perhaps very interested as one would be in a bit of serious information. Maybe she is taking in the secret of the man on the far right as communicated by white sock man. Its not her gaze or expression that contributes to the complex sexual politics of the image but her placement within the tableau, where she is, and her hand on the knee - almost the inside thigh of the man to the left. Whereas so far narrative has unfolded through the direction of gaze and expression, it is this hand that takes us to the final character in the story.

The man on the left is a kind of inelegant counterpart to the man in the top of the image. More rock n roll than disco I imagine. He is relaxed and confident in his posture, with his left arm around the women being reciprocated with her hand on his knee. These are "touches" of possession, of an intimacy that extends beyond the circumstances of this scene or of the shared friendship of its actors. The key feature of the posture of the man on the left, however, is not that he has his arm around the women, but that he sits with his legs spread wide. He dominates his space, advertising his confident sexuality.

The image suggests a story of sexually charged interaction. It could almost have been staged, a tableau vivant representing the spirit of the disco, with its faux glamour and the all too often vast gulfs between the required appearance and the underlying reality for those entering such adult playgrounds. Looking at the image, I am left trying to imagine where these people are today, what they look like and what they think of their youthful experience of disco-pinnacle. This spur to imagination also arouses thoughts of whether I would like to be in this tableau, to be one of the these characters or someone one like them. I think not, but then is this a fairytale or a dark parable of human folly?

Not a contemporary Hogarth, but I would bet that had Hogarth been resurrected in the 1970s, he would have appreciated this image immensely.
Posted by Emerson Sprocket at 09:34 1 comment: