A remarkable un-photographic photograph of a whaling schooner, 1886 (after Whistler) 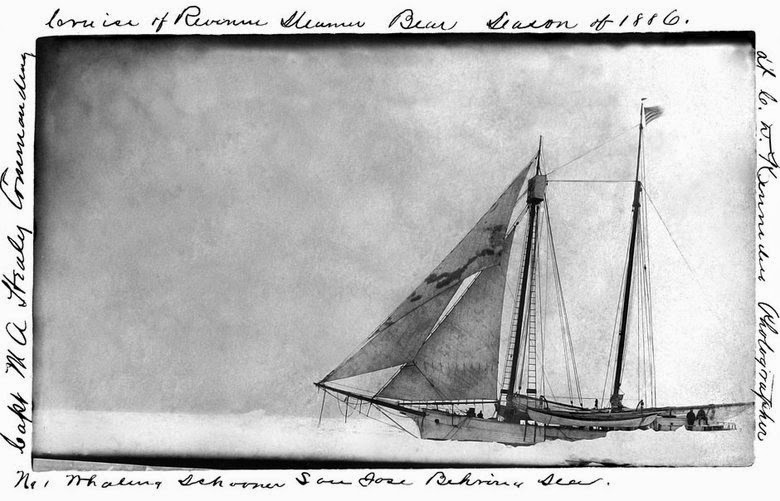 Here is an eye-catching photograph. Its an image made by a member of the crew of the US Revenue Cutter Bear, the only US government naval presence in the Bering Sea in the early years after Alaska was purchased from Russia. (The Bear had a extraordinary history, having been constructed in Dundee in 1874, seeing action in World War II and only finally meeting its end while being towed to Philadelphia in 1963. More on its history can be found here.) The photographer, as we learn from the inscription on the righthand side was Charles D. Kennedy, who was a young officer on the Bear. As the the inscription also indicates, the subject matter of the image is the whaling schooner San Jose in the ice of the Bering Sea in 1886.

When I first encountered this photograph I initially thought it was a rather good pen and wash illustration, because it has a certain un-photographic quality. A closer look dispels these first impressions as it has a few features unlikely to appear in a drawing, such as the blurred edges of the flag blowing in the strong wind, the inexplicable staining of the sail, and (perhaps) the indistinct figures to the far right the image.

But why does it still have a somewhat un-photographic look? Several features seem particularly important in bringing about this effect. The first is that the picture looks like it has been slightly or partially solarised, though the relative whiteness of the ice seems to suggest otherwise. This can be explain I think by the fact that the light leakage that caused the solarisation came in from the top of the image, particularly to the left where the darkest patch is to be found. But whether it is partial solarisation or the result of some other cause, the ship and it background look somewhat unreal in just the way one would expect from solarisation.

The second un-photographic feature is the composition. Amateur photographers, and even accomplished ones whose purposes are documentary, tend to place the main subject of the image in the centre of the frame. The placement of the ship to the right of the frame, with an empty lefthand side, is more the technique of the illustrator artist wishing to give a sense of the ship as unbound, if not moving, existing with a dynamic environment and being drawn forward into the empty space.

Finally, it looks as if the image is produced under the strong influence of the painter James Whistler, not only because it embodies Whistler's devotion to whites and greys, but also because Whistler' subject matter was often many ships, boats and and water.  His Harmony in Grey: Chelsea in Ice (1864) is, like many of his paintings, far more impressionistic than my whale  schooner image, but both share a certain tonal quality. 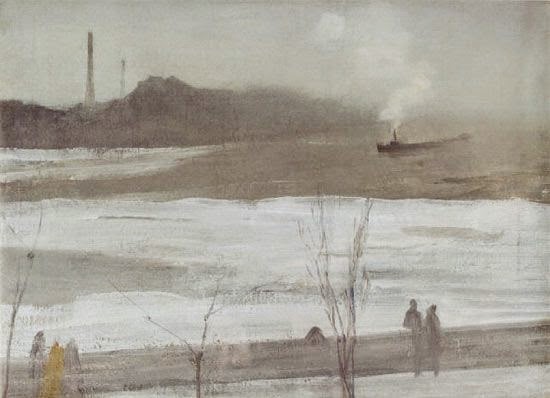 But I just can't decide whether a young US navel officer working on a ship policing the northwestern frontier would in the mid 1880s would be likely to know about Whistler. Maybe, but then as we hardly know anything about him, then why should we suppose he would. After all, not many of his other photographs have the same Whistler-like quality. Setting aside those which document people and places on land, Kennedy's other photographs of ships are less interesting and less reminiscent of Whistler: 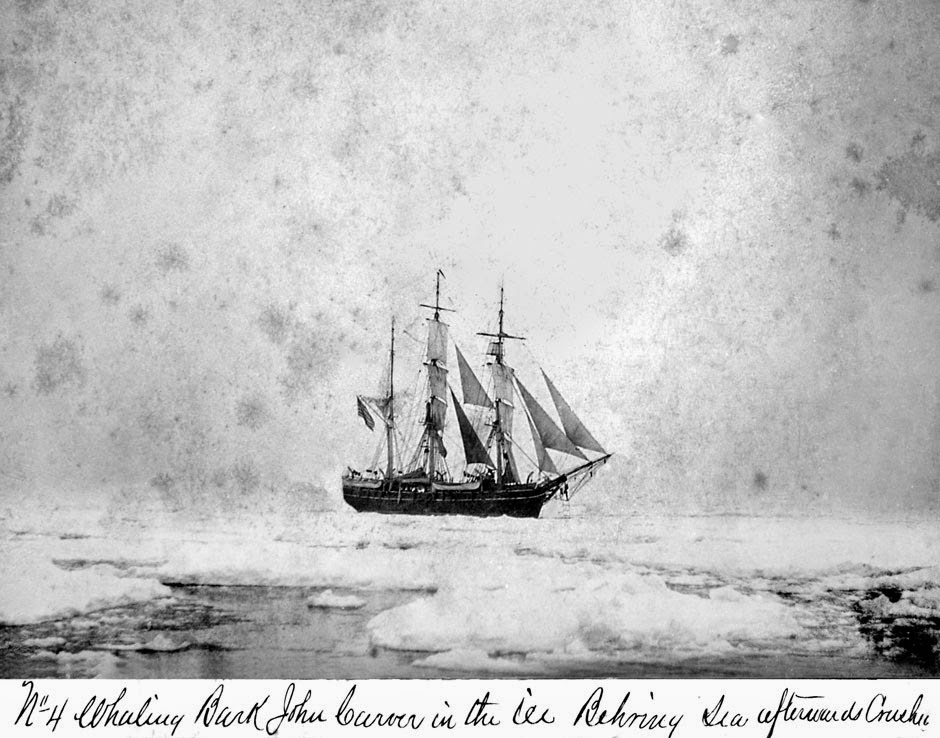 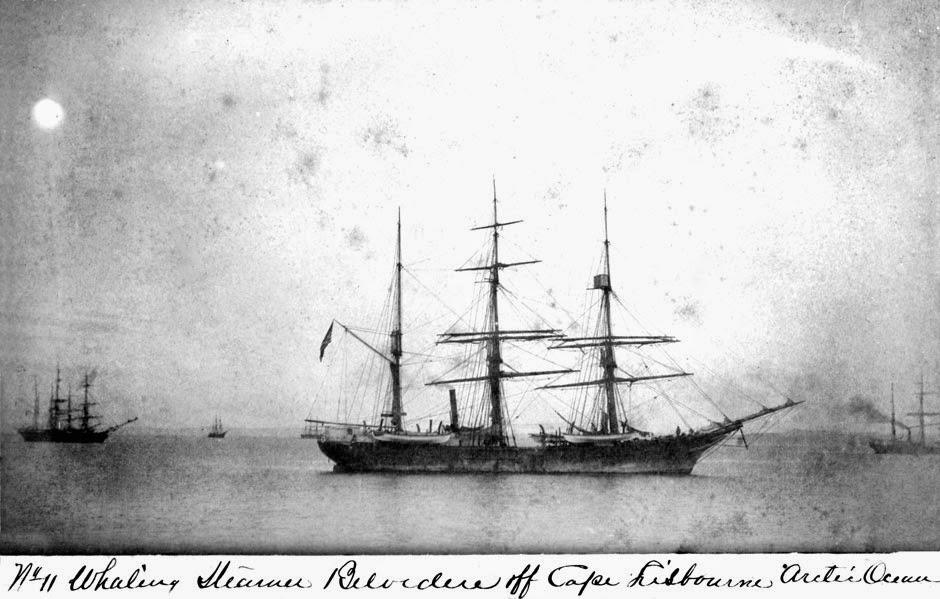 Its is also worth nothing that these latter two photographs follow the documentarian's convention of placing the central subject matter squarely in the centre of the frame, depriving these images of the drama attached to first image of the San Jose.

But these latter images, despite being very photographic, do seem to owe something to 19th century naval painting. Compare them with, for example, this: 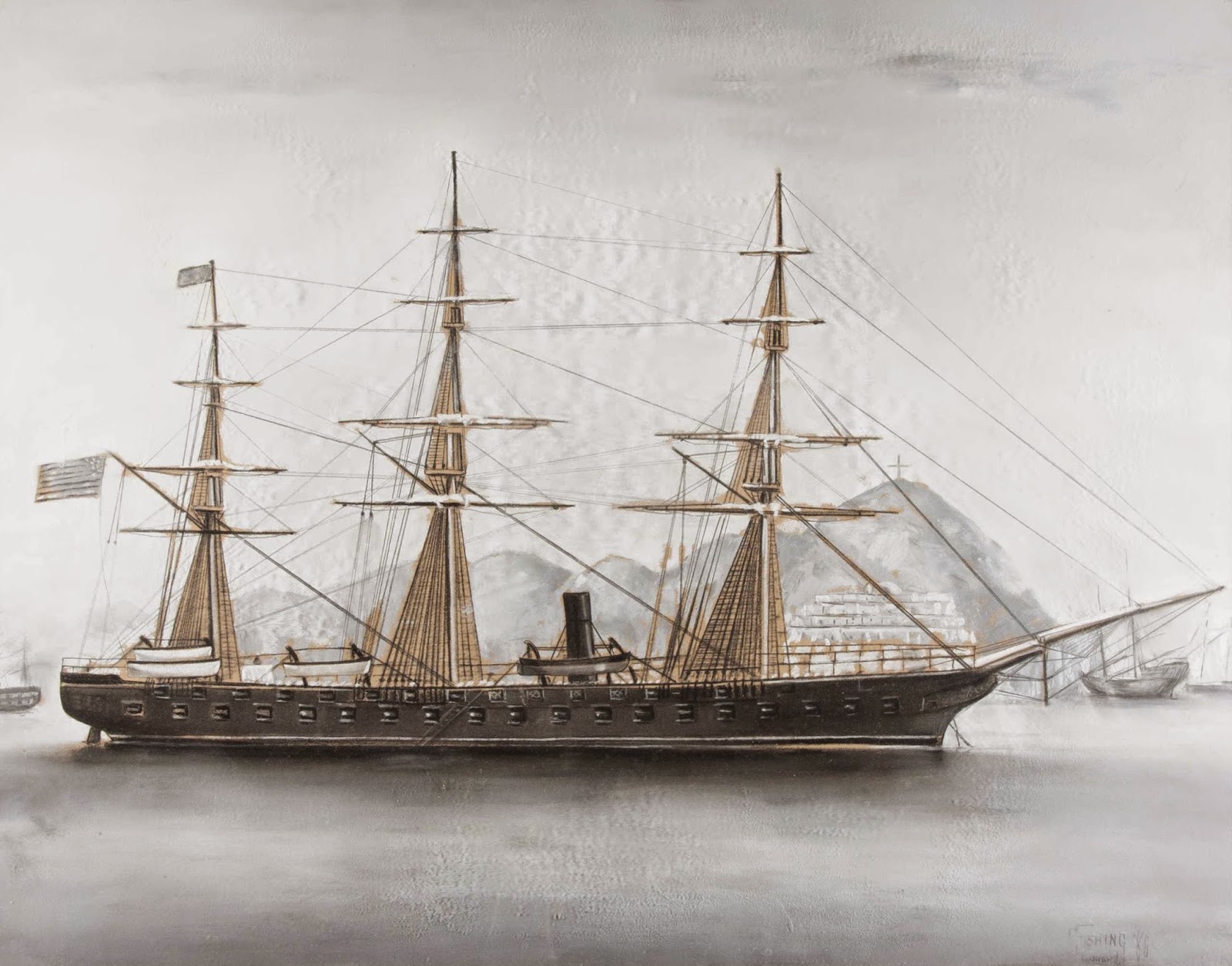 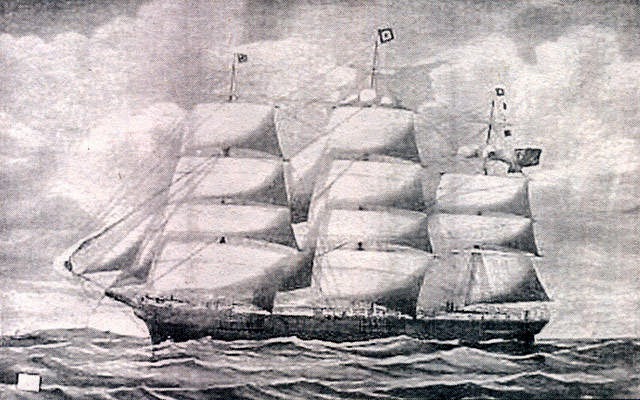 But then most naval painting exhibits a very limited aesthetic sensibility, showing us ships side or three quarter on, sometimes at anchor in an anodyne landscape, sometimes shooting cannonballs at another ship. With a few exceptions its all pretty similar and unremarkable stuff; not a genre for anyone other than the ship enthusiast (and even then, not for the most aesthetically adventurous among that limited group).

And yet, Kennedy's un-photographic photograph of the San Jose stands out as among the most memorable pictures of a ship I have every encountered. It owes something to illustration and painting, but maybe it owes even more to sheer luck. Somehow I doubt it is luck, and I can't help to want to know more about Charles W. Kennedy though it would be appear he has disappeared into the sea fog of history without leaving many traces.

Posted by Emerson Sprocket at 07:48