Duane Michals - "Things are Queer" (as a Fairytale).

For me Duane Michals is a photographer that I more admire than like. His work is always clever and challenging, but - for me at least - oddly cold. The individual images are not unappealing, but they don't  capture my attention so much as the narrative idea which tickles the intellect without ever satisfying it. Consider one of his most famous image series, 'Things are Queer' (1973): 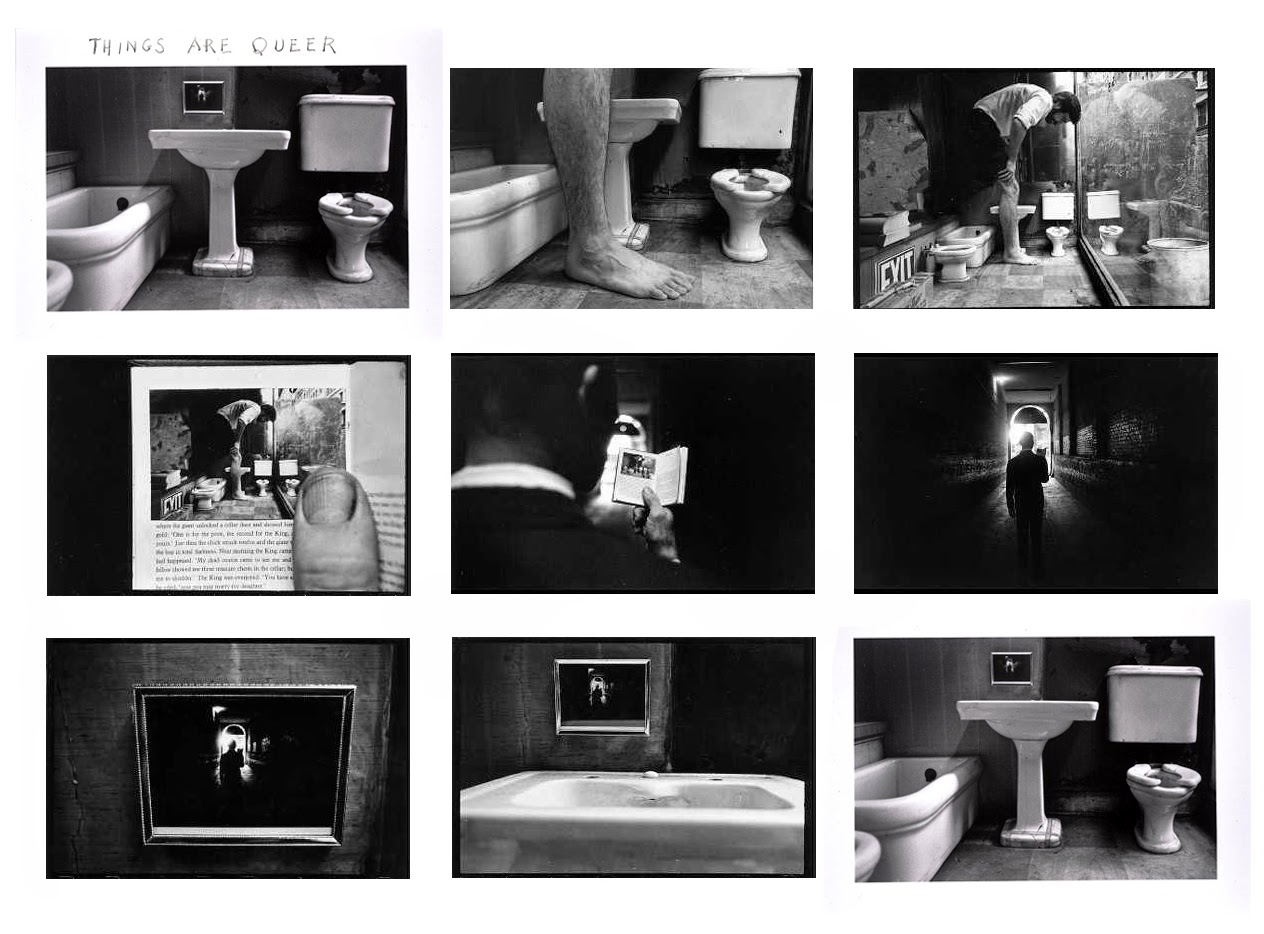 For those unfamiliar with the work, a brief explanation might help. The work is a circular narrative, with the first and last image being identical, but the significance of the image is radically altered by the narrative. So, in the first image we have what appears to be a bathroom suite. In the second image the camera perspective moves slightly closer to the wall and fittings, and a  foot and lower leg that are so large as to be out of proportion with the fittings is introduced into the scene.

In the third image the camera steps back and our understanding of what we are seeing changes and is partially clarified. What we discover is that the bathroom fittings are miniature and the leg belongs to an adult male who is bending over, appearing to look at his feet. Two other features of this image are important, and not so often commented upon. The first is what we see on the left of the picture, some sort of unidentifiable backdrop on the wall, possibly a map, that appears to be peeling away at one corner, and some other unidentifiable items as well as a partially obscured exit sign.  Secondly, on the right we discover the wall is a reflecting surface of some sort, but much of what is reflected appears smudged, except for the bathroom fittings, some of the bent-over man and some elements of the exterior of a building.

In the fourth image the camera takes another step back and we discover that the third image is an illustration within a book, and the prominent thumb introduces a new character who is holding the book. I think this is in some respects the most important image in the series and I will return to it in a moment. In the fifth image we again step back and the book, with the picture (third image of the sequence) is being read by an indistinct man. In the sixth image we again step back and see that the man reading the book is in some dark passageway, with a lighted exit "at the end of the tunnel".

The seventh image reorients the viewer's perspective upon the sixth image revealing it to itself be a picture within a frame, mounted on a wall. With the eighth image we take another step back and discover that the framed picture of the seventh step in the sequence is mounted above a familiar sink. With the eight image in the sequence take another step back and discover ourselves at the place where it all started.

What are we to make of this sequence? It might be tempting to say the circularity of the image narrative is the point at leave it at that, but this is unsatisfactory for two reasons. First, it is hard to not suppose that the handwritten title at the top makes reference to Michal's  homosexuality, and as several critics have taken this to be the key to the interpretation of the whole. Jonathan Weinberg's essay on 'Things are Queer' is among the best examples of this approach, and I certainly wouldn't went to deny the significance of Michal's homosexuality for thinking about what is going on in this work.

The second clue for understanding the work is to be found in the small portion of text in the fourth image in the sequence. It is a fragment of the Brother's Grimm fairytale (from 1812) that goes by various titles, including 'The Story of the Boy Who Went Forth to Learn Fear' and 'The Youth Who Could Not Shiver and Shake'. The Story is about a boy (Hans) who, we are told, is very stupid and incapable of feeling fear (of shivering and shaking). He is thrown out of his home by his father, and goes into the world to find learn how to feel fear as he believes this is a prerequisite of worldly success. After various people fail in their attempts to teach him to fear, he is finally challenged by a King to spend three nights in a haunted castle and promised the King's daughter in marriage if he succeeds. Hans survives all manner of ghouls and threats without feeling fear, and this ordeal culminates in a confrontation with a giant.

The giant promises to teach the Hans fear by killing him. Hans responds that the giant will have to defeat him in a fight if he is to kill him, and the giant agrees, taking Hans to a forge in a basement of the castle for the fight. The giant picks up an ax and splits an anvil in half, to which Hans replies that he can do even better. He picks up an ax and heads to another anvil, and then:

The monster was so surprised at this daring on the part of Hans that he followed him closely, and as he leaned over to watch what the youth was going to do, his long white beard fell on the anvil. Hans raised his axe, split the anvil at one blow, wedging the old man’s beard in the opening at the same time.“Now I have got you, old fellow,” cried Hans, “prepare for the death you deserve.” (emphasis added)

In the Michal's image this is the point in the tale that we see in the open book. The giant pleas to be let go and promises Hans all the wealth in the castle:

The giant kept his word, however, and leading the young man back to the castle, pointed out to him a cellar in which were three immense chests full of gold. “There is one for the poor,” said he; “another for the King, and the third for yourself.” Hans was about to thank him, when the cock crowed, and the old man vanished, leaving the youth standing in the dark. “I must find my way out of this place,” he said, after groping about for some time, but at last daylight penetrated into the vaults, and he succeeded in reaching his old room, and lying down by the fire, slept soundly till he was aroused by the King’s arrival. (emphasis added)

Returning to Michal's sequence of images, the text suggests the stooping man in the image is the giant, the last of the castle-dwelling spirit's attempts to teach Hans fear and vanquish him from the castle. The man in the passageway looking at the image of the giant - and perhaps reading the text - refers to Hans, trying to find his way out of the cellars, and finally finding some light to lead him back to the world above.

But where do we go from here? The interpreter of Michal's image sequence now has a circular narrative sequence, a plausible reference to Michal's homosexuality (incidentally, the reference to a fairytale, any fairytale, might be said in a very unsubtle way to reinforce this reference), a reference to a particular complex fairytale that itself has been given widely divergent interpretations. What are we we to make of "Things are Queer"?

I don't have much of an answer, but part of the point of these reflections to illustrate my point that Michal's cleverness is so engaging that it overwhelms his imagery as aesthetic objects. He might not care about the latter - though other work by him suggests otherwise - but I do, and hence my admiration without much liking of his work. So much intellectual complexity that grabs us with multiple layers of meaning, but the images are reduced to cold, unmoving means to reflecting on the puzzles of meaning.

But here are a few more thoughts. First, 'Things are Queer' reflects Michal's belief that photography fails to capture reality, and does so by upsetting initial expectations of a photographic encounter with the real world, leaving us in a reality as "real" as a fairytale world. Here is a wonderfully brief and clear statement by Michal's of the position in his work 'A Failed Attempt . . . ' (1976): 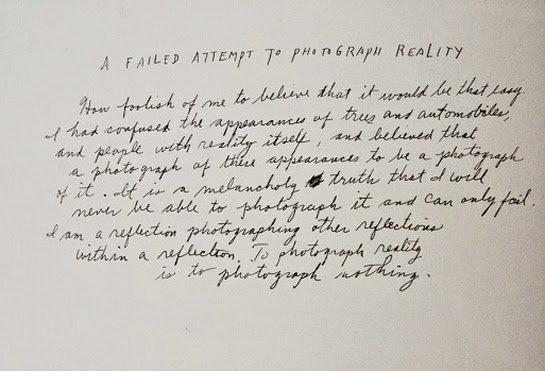 The penultimate sentence in particular could almost be said to said to echo the concerns of 'Things are Queer'. The reflective wall on the lefthand side of image three in the sequence seems to suggest an alternative world, but also one in which reflection and reality are blurred. I may be intrigued and even dazzled by these ideas, but the images themselves seem no less connected with the reality they are used to question. At least, so it seems to me.

Secondly, the Brothers Grimm ' fairytale employed in the sequence strikes me as relevant. The giant takes Hans down into the dungeons of the castle, to a blacksmith's forge, for their fight, and when it is over Hans says he has to find his way out of that place. The suggestion is that the last of the challenges that are designed to make Hans feel fear takes place in hell in confrontation with a demon. Remaining fearless, Hans overcomes the demon, wins a third of the castle's treasure, marries the princess, and thereby has found a success that his father thought he could never have and that Hans believed could only come if he learned to fear. Fearless is the means to success rather than a barrier to it, and this I take out means we need courage in the face of the queerness of the world.

But how does this relate back to the fairytale world of the Michal's sequence? Or, how might we relate all of this information to the sense of many that the sequence concerns homosexuality? I'm not sure, but I find the levels of complexity wonderful and intriguing. Its pleasurable to think about, and I often find new things in the images to wonder about. But this seems a strictly intellectual exercise, enjoyable without doubt, but without falling in love with the images that make up the sequence. But also, his work always leaves me with more questions than satisfying answers. But then, maybe if their meaning could be unravelled, they would cease to be quite so queer.

Posted by Emerson Sprocket at 04:28 3 comments: