I stumbled upon this photograph recently and haven't been able to shake its powerful effect. Maybe its just me, but this doesn't seem like an ordinary portrait. 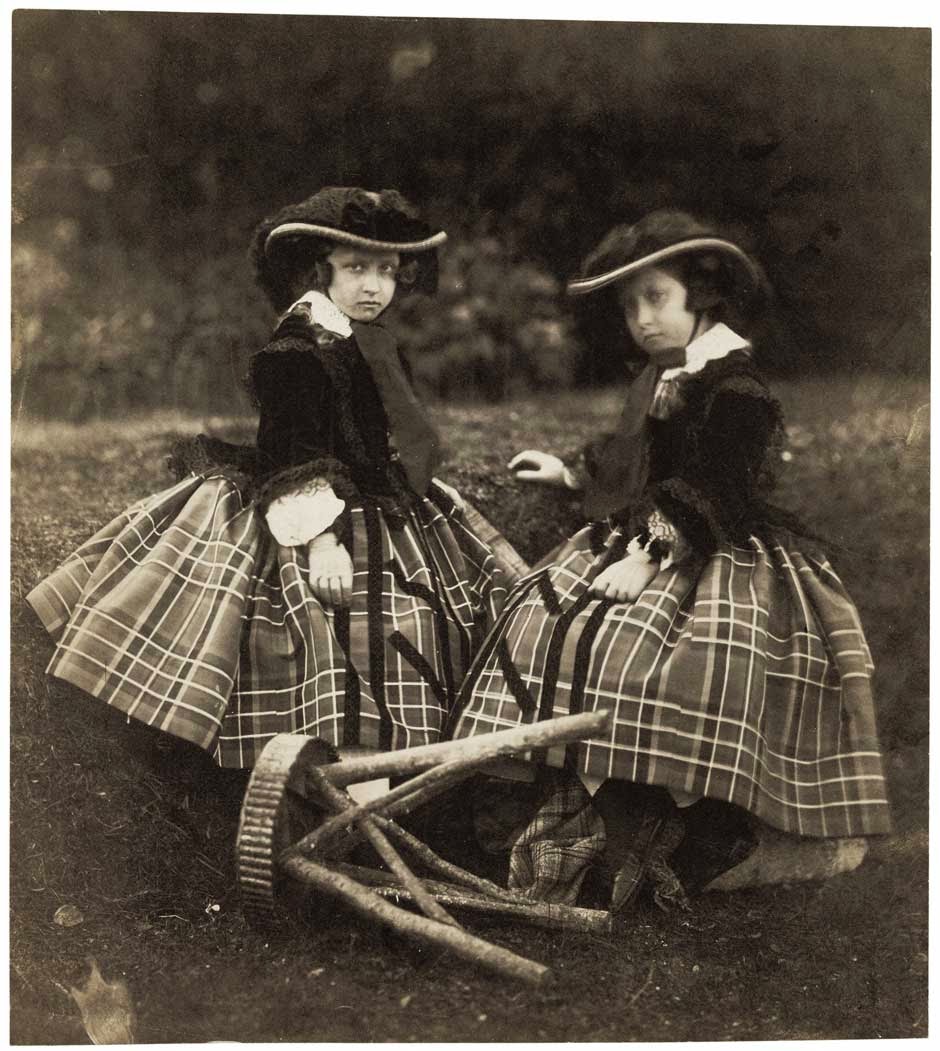 First, some basic details. On the left is Princess Helena (1846-1923), the fifth child of Queen Victoria and Prince Albert. On the right is her younger sister, Princess Louise (1848-1939), the sixth child of the same royal parents. The photographer is Roger Fenton, one of the most distinguished photographers of the middle 19th century, about which much could be said. All these details, and the origins of the photograph itself I will leave to those who are interested to discover. My interest is the effect the picture has, at least upon me, unencumbered with more detail about the sitter or the photographer than I have already given. (One final detail, however, the slanted top edge of the image appears to be in the original and is not merely an effect of poor scanning.)

There is something of victorian gothic horror about this image. Although the sisters were not twins, they do look very similar and are obviously dressed, as twins too often are, in identical outfits. And so the first point of comparison for me is Diane Arbus' famous and unsettling portrait of twin girls encountered on the street: 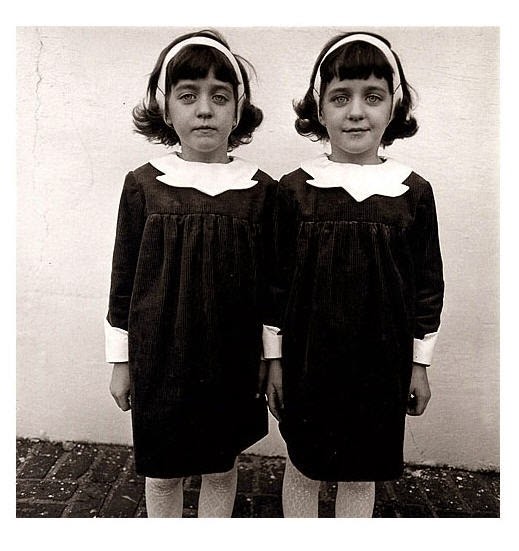 Arbus' image famously inspired the appearance of twin girls in the hotel corridor in Stanley Kubrick's  masterful horror film The Shining. But what is it that is so unsettling, even a touch terrifying about the image? This is a question that deserves an answer that would take us too far from the Fenton picture which is the subject of this post. But crucial to any answer would be the strikingly emphasised co-presence of powerful sameness and subtle difference that invites us to see the girls as identical and yet in some way opposite as well. The small differences to be seen between the girl's eyes and the mouths, in particular, when set against all that is so similar, gives them an uncanny appearance.
Back to Fenton's portrait of the young princesses. In the picture they are very similar in appearance, though again there are differences as well - perhaps not as marked as those to be found in the Arbus picture. Like with the Arbus image I found myself being drawn to the faces of the two princesses. I find it hard to characterise the expression of Helena - the one on the left with the face in sharper focus  - but the downturned lips and shadowed eyes give her a menacing look that contrasts with her overall appearance of youthful innocence. Maybe she felt frustrated and bored that this photographer was taking up he time, but whatever the cause I find her expression quite unsettling.
This is heightened, I suspect, by the contrast with the appearance and expression of Louise. Her face is not is not sharply focused but it still shows a downward turn of the lips and distant eyes. If I had to give a name to the expression it would be 'disapproving', but to a degree in which disapproval teeters on the edge of menace. What is certainly true is that neither girl displays the happiness and lightness of being that one so often encounters in children of their age at play. Of course, they are not at play. But what are they doing? Having their picture taken can only be part of the answer for reasons I will come to shortly.
But first, looking at their faces raises for me the question of who, other than Fenton, they were seeing when this picture was taken. Children find it harder than adults to hide their feelings about people and the circumstances they are placed in, and these two children are not only unhappy, they seem to me to be disliking something so much that their dislike and menace is powerfully projected. And this so powerfully contrasts with their gay (in the Victorian sense of the word) clothing.
Aspects of the composition heighten the sense of menace. The overturned stool - or is it some kind of garden table - does some of the work here. What an odd piece of furniture this is. The legs are made of unfinished sticks. but the seat or tabletop looks more manufactured, perhaps even metal. And why is it overturned? Against a backdrop of such elegant dress, this odd and toppled furniture looks powerfully out of place. What on earth is it doing in a portrait?
Then what are we to make of the unidentifiable jumble of things just below the line of Lousie's skirt? Some sort of piece of cloth? A bit of stone that looks in its obscured appearance a bit like a ploughshare. Is it a leg of a bench that Louise is sitting upon? In fact, what is the position of these girl's bodies? They don't look like they are standing, but they are not obviously sitting either. Well, maybe Louise is, but both of them appear to be strangely unbalanced and yet also comfortable. Finally, what is Louise resting her hand against? A lengthy mound of earth? Where are they? What were they doing before the picture was taken. These compositional mysteries work together with the faces, the clothes and the general air of the picture to create a wonderfully gothic mystery of an image.
If I had to give this photograph a title, I would call it Unhappy Ghosts.
Posted by Emerson Sprocket at 16:17