While I admire Garry Winogrand's street photography, and understand its importance in the traditions of American photography, I am rarely bowled over by his images. To very loosely adapt  some terminology of Roland Barthes, they strike me as all stadium and no punctum.

But then there are apparently over a million images in the Winogrand oeuvre and I have never actually seen an exhibition of his work. So I freely confess my judgment might be flawed. However, one of his images that is remarkable and captivating is this: 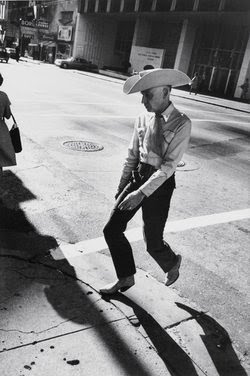 Entitled Dallas, 1964 it has something of the uncanny to it. The thin, lankly cowboy seems not only rubbery, like a toy character, he also seems to be just about floating above the surface of the street. There is something other-worldly, or at least 'wrong' about the image.

The effect is produced, in part, by the position of the camera above the cowboy, and of course the speed of the film that freezes his motion as he steps onto the very slightly raised curb. It strikes me however that the thin and lanky body is just as important to the effect.

We could ask what it means, and I suppose that if we did we would struggle to find an answer. First, because there is no reason to suppose that the right answer will be found in this one image in isolation. We might need to see it in the wider context of his work. Moreover, the meaning may not go beyond showing us his subject matter - human beings in public spaces in America - and inviting us to both appreciate what was there to be seen. (This approach would place his animal photographs is stark contrast to the rest of his work, as these really do present a vision of noble and grand creatures laid low by their near-brutal captivity).

One final point about the image: most other photographers would have been tempted to crop the image differently. Maybe he didn't crop it - I don't know - but the width to height ratio suggests cropping even as the composition suggests it wasn't cropped. Look at the fragment of the women on the lefty edge of image. It suggests a rough and ready composition, as if the camera was just whipped out to capture a subsequently unaltered slice of reality. Maybe, but whatever is the case, I find the composition puzzling.

In fact, the whole picture is a puzzle. An apparently unreal slice of reality. If only we could see the strings connected to the puppet cowboy's limbs, it would all make sense.  Somehow it evades sense, and that is at the heart of its effect and appeal.
Posted by Emerson Sprocket at 04:28