The New York Review blog has just posted a very interesting article by Nathaniel Rich about  photographs of New Orleans jazz pioneers and 'royalty' made in the late 1950s by Lee Friedlander. While I confess to a certain fondness for some varieties of jazz, the classical New Orleans variety has never been among those I have spent time with, or wanted to for that matter. Still, I found this article very interesting because it movingly describes the collapse of popular interest in said variety of jazz at the time Friedlander was making portraits of the then elderly originators of the style - the style which of course is the origin of jazz itself. This collapse of interest coincides with what is probably the high point of popularity for jazz as a musical genre, though what was popular then had evolved into something very different to its New Orleans 'trad' origins.

The article describes how the Friedlander photographs were taken during a period when outsiders to the New Orleans jazz scene were attempting to revive the style, rekindle interest in the still living titans of the form who - and isn't this a familiar story - were impoverished and unrecognised outside of their small circle.

As Rich points out "The attitude of the professional revivalists tended to be equal parts celebratory and anthropological . . . [but]"

Friedlander’s portraits do not feel celebratory . . .  Friedlander found authenticity in the toll taken on his subjects by decades of privation and indifference. In his portraits the musicians—most of whom didn’t have the chops to follow Joe Oliver and Louis Armstrong north to Chicago forty years earlier—stare wistfully into the distance, or at the wall, as if indulging in some bittersweet private nostalgia . . . There is dignity in these portraits, to be certain, and pride, but there is also despair.

The Friedlander images reproduced in the article confirm this reading, but one of the images in particular caught my eye. It is of Joe James, the famed pianist in the Kid Thomas Valentine Band, plus an unknown guitarist: 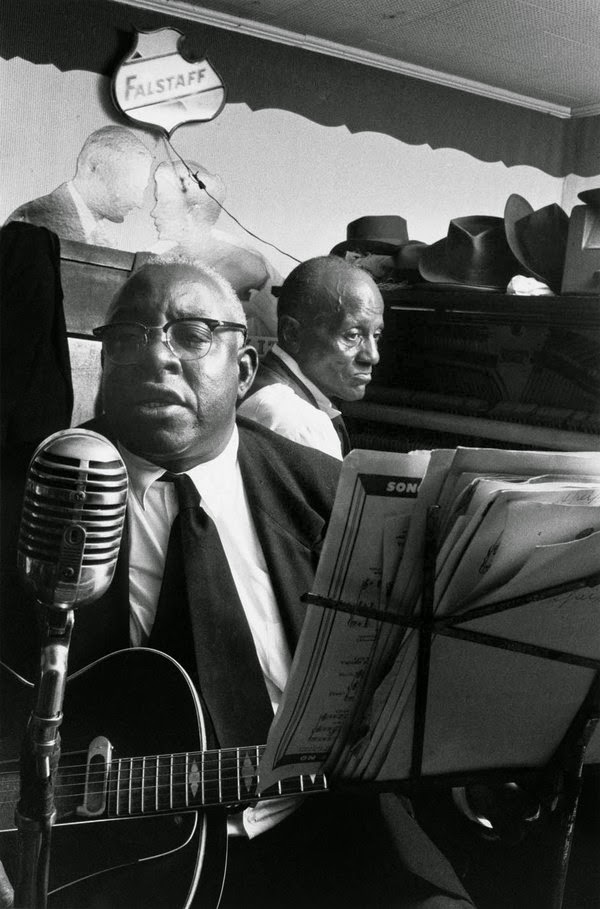 Yes, there is the melancholy than Rich writes of, but this more than any of the other images reproduced has the kind of complex but fascinating composition characteristic of Friedlander. The contrast with the cut-out couple in the beer advertisement, the pile of hats, and the conglomeration of lines traveling in every direction. It is unutterably sad, and wholly captivating. Compare it to this second image, obviously taken at the same time (at the Fireman's Hall in Westwego, for anyone interested): 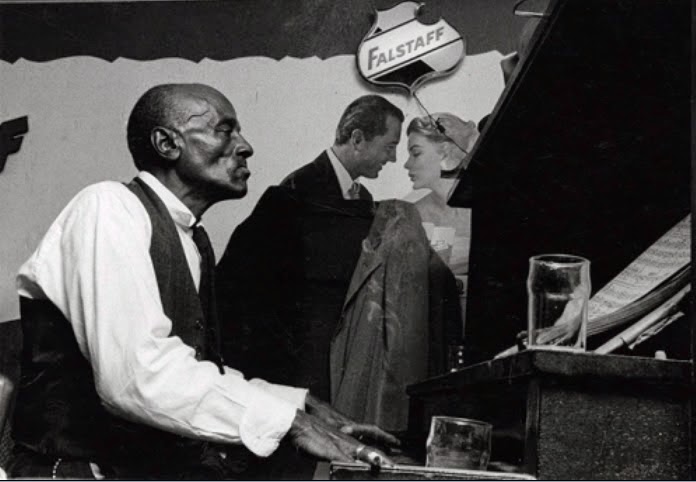 It expresses the dignity and despair that Rich speaks of (this images is not one that he reproduces), but not with the power of the former. It is interesting, but not anywhere near as captivating.
Posted by Emerson Sprocket at 15:20