Well, who does? At least, who likes advertising as a form of communication, rather than, say, admiring occasional examples of it? The enthusiasm for it among those who work in the industry needn't detain us. It is worth wondering, however, what is so objectionable about advertising. Banksy has an answer: 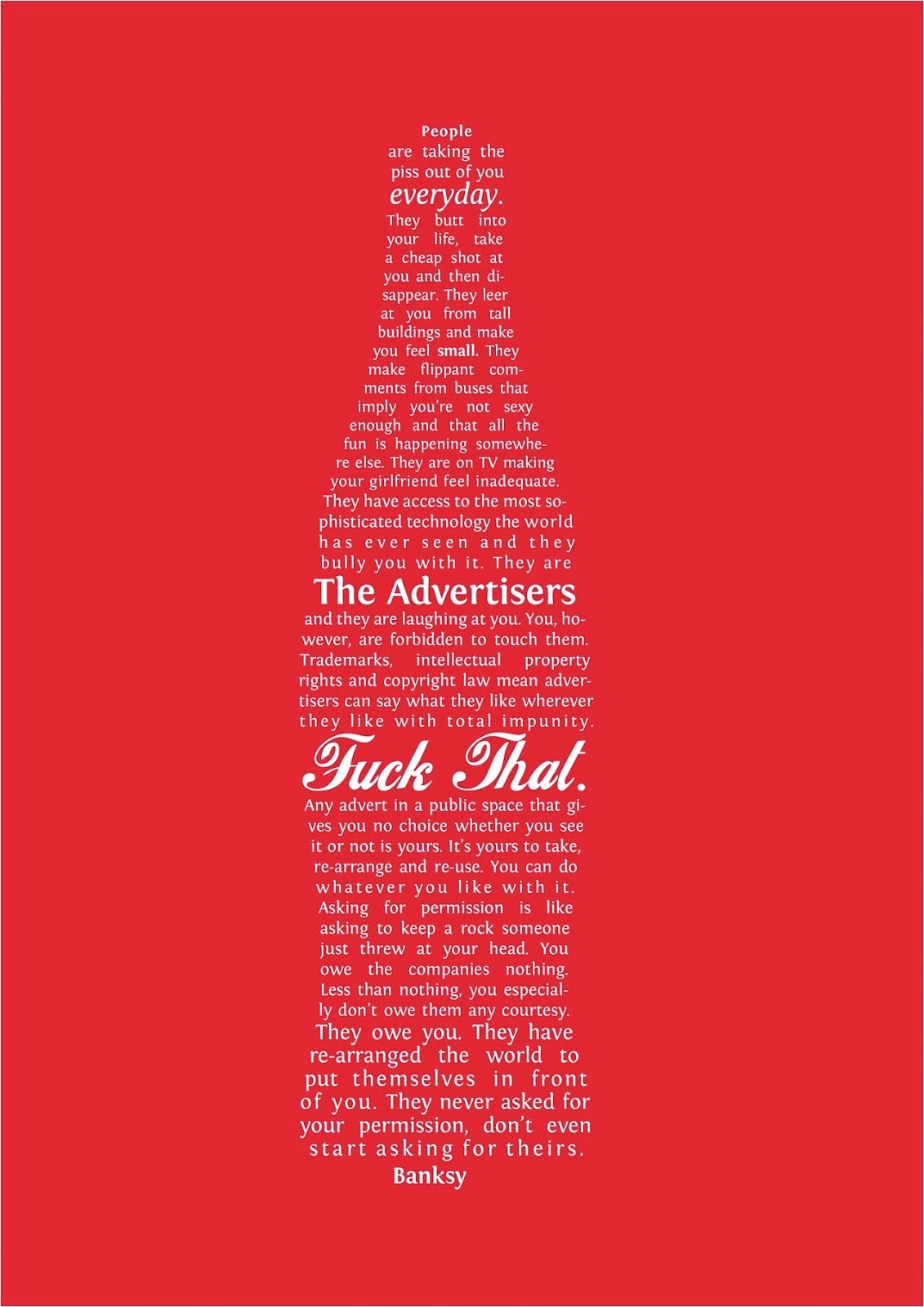 This isn't terribly to read, so perhaps this version will better help you get the gist of his argument: 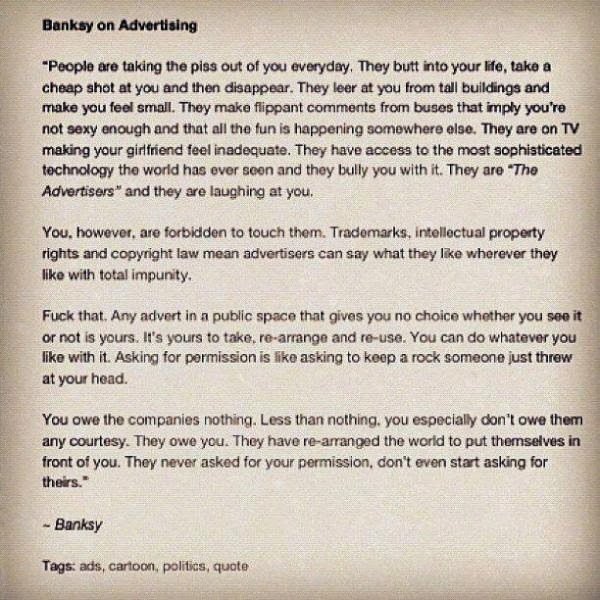 It is inescapable that some pixels must be spilt noting that the text was very strongly inspired by Sean Tejaratchi's 1999 essay "Death, Phones, Scissors", and the setting of it into the coke bottle shape was done by an Italian graphic designer. There has been quite a dispute about the text, and if you want to waste a bit of your life pursuing it you will find plenty about if you search hard enough.

The more important thing is the message. Aside from the observation of the obvious - that advertising is thrust in front of us and there is nothing we can do to avoid it - the main thrust of the statement seems to be that we shouldn't we afraid of defacing advertising if we so wish. I'm not sure I ever did feel worried about this, though I have never had a systematic desire to deface advertisements. Avoiding them has been enough for me, though I am sure I have taken a pen to more than one in my lifetime. I suppose the statement also makes a point, rather obliquely, about the attitudes of advertisers to the public they wish to influence.

All of this is fine. No objections from me. Except, of course, the obvious point that one might judge it a slightly curious argument coming from someone who's primary mode of expression is graffiti ("-art"), which forces itself upon us in public spaces every bit as much as advertising does. The point is nicely made by a representative of the advertising industry here.  In response one French advertiser has made a series of imaginary advertisements employing Banksy images. Here is one of them: 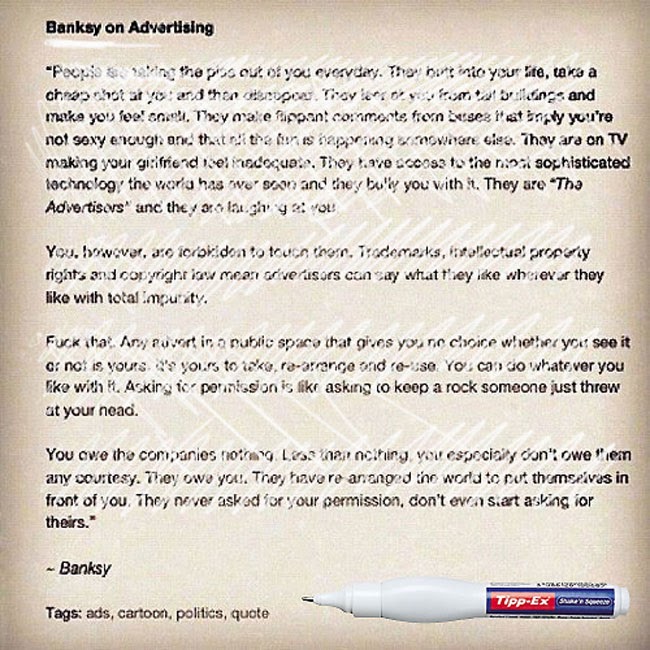 "But Banksy produces art." Well, maybe, but only if the criteria for something being a work of art will also allow that, in principle at least, an advertisement could be a work of art. Regardless, if all of the public advertisements encountered on the streets could be replaced by more or less subtle Bansky-like pictorial and linguistic reflections on modern life (graffiti-art), that would probably be an improvement. But we would, of course,  have the right to deface them and loath their creators that Banksy so eloquently articulates. Doing so would not make you a cultural vandal, but someone fighting back against the arrogance of the graffiti artists who presume to force their uninvited thoughts and images upon us. The deeper problem is that Banksy's work, like so much of contemporary art, has a deep relationship to the ends and means of advertising. If Damian Hurst had not become the artist he has become, he could have been a world leader in marketing and advertising. The key difference between contemporary artists and advertisers is that for the former they themselves are the brand their work promotes.

Enough of this. Surely we can do better in our critique of advertising than this stuff. I won't pretend to do more than scratch the surface of what might be said, but here are a few points. So much advertising is aesthetically objectionable. It is ugly in appearance and trite in message. It celebrates falsity in so many of that terms meanings. People are usually not as they are presented in advertisements (Banksy obliquely makes this point) and the products are often not as they are presented. But really, and this gets closer to the heart of the matter, advertising is the celebration of sophistry. If sophistry is the exercise of the means of convincing others to believe something regardless of its truth - and this is the sense of sophistry that Plato criticises in the Gorgias and elsewhere - then advertisers are simply the most accomplished sophists in the modern world - edging out lawyers and politicians, the traditional leading exemplars of the craft.

Oh sure, advertisers must comply with the Trade Descriptions Act which doesn't allow them to say anything that is demonstrably false about the product they advertise. But any sophist worth their salt would steer well clear of the demonstrably false as it provides too easy a means to exposing their fraud. But the avoidance of statements of outright falsehood still provides plenty of scope for misleading. But if advertisers operated to an ethical principle along the lines of 'Only communicate in you advertisement what you as an advertiser believe the be true and accurate', then I my objection would be diminished if not dissolved. The deep moral objection to advertising is that it is the product produced by an industry that does not feel the need to actually believe what they communicate.

I remember years ago standing in the kitchen at some party talking to someone who had been working for a couple of years in advertising. I asked him if they thought their company would accept the business of an organisation promoting paedophilia who were looking to start a campaign to change the laws on the age of consent. He thought about briefly and said, yes, they would take the account. After all, they don't have to believe in what they sell, they only employ the means to help those who want to sell something to do so. The responsibility lies with the seller, not the communicator. To be fair, this was the late 1980s, and I am not sure many young advertising execs would take this line today. Still, the point remains. You cannot escape the moral hazard of sophistry by claiming that the responsibility lies with the person on who's behalf you employ communicative deception.

There is so much more that could be said about the horrors of advertising, including perhaps that it is a necessary evil for the kind of society we choose to have. Even we if accept the existence of this necessary evil, we might nevertheless (and, if we like, in the tones of indignation employed by Banksy) ask how dare public authorities sell public space for advertising, or in conditions in which what we do with our property is controlled, why allow companies to sell public spaces for this purpose? We could improve our environment with a minimum of fuss and pain if we put heavy restrictions on the display of advertisements in public spaces. But I appear to have fallen back to my aesthetic objections . . .

Posted by Emerson Sprocket at 05:32