This is Shepherdess by Stefan Moses. 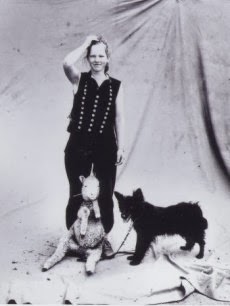 It is one of a series of images Moses made in East Germany soon after German reunification. The images are very much in the tradition of August Sander, presenting 'types' of people - typically identified by the work they do - but Moses' images are more humane and less sociological than Sander's. They are often quite whimsical, as the composition of this image illustrates, and this lightly humorous eye is very effective at emphasising the humanity of people who had been both locked behind the iron curtain and as a result poorly imagined by those on 'our' side of that curtain. Another way that Moses emphasises the humanity of his subjects is through the very effective use of a backdrop, something that again distinguished his approach from that of Sander.

His work deserves to be much better known than it is in the English speaking world.
Posted by Emerson Sprocket at 01:03